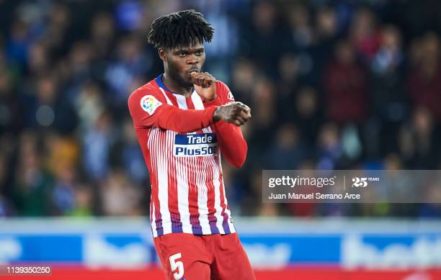 Baxter delighted with summer move, Partey transfer claim made and Pulisic opens up on Chelsea target Reyna in icchelseanews roundup..

Thomas Partey’s father Jacob has revealed that Chelsea were keen on signing the midfielder from Atletico Madrid, but they lost out to Arsenal.

Partey become one of the most talked about players in the transfer window and was constantly linked with a move to the Emirates, but their delay in getting a transfer deal wrapped up meant that we were interested in a possible deal.

Frank Lampard was keen to add a holding midfielder to the squad and was keen to wrap up a transfer deal for Declan Rice, but with his asking price way too high, it meant that a late move for Partey was going to be made.

However, after hearing that we were showing a late interest in signing Partey, Arsenal FINALLY decided to pay his £45 million asking price, pay him £200,000-a-week and bring him to the Premier League to help bolster their Champions League hopes.

Now, after the dust has settled and the transfer window has closed, Partey’s father Jacob has opened up and confirmed that the club were indeed trying to secure a transfer deal for Partey, He told Joy Sports: “We actually weren’t disturbed by anything because we hoped a bigger team will come for Partey.

“We were aware of the [other teams that were interested]: Juventus, Chelsea and so forth.

“So about all these we knew God was with us. From that minute we started to dance to ‘Party after Party.’”

Christian Pulisic is excited by the potential in Giovanni Reyna and admits “the sky’s limit” for the Chelsea transfer target.

Reyna has become one of the most excitedly gifted players in the Bundesliga and is another American tipped to become one of the very best players on the planet, and maybe follow Pulisic to the Premier League in the coming seasons.

We have already been one club that has been tipped to make a possible move for Reyna in the next few seasons and Pulisic confident that a teenage compatriot can live up to expectations for club and country.

The United States international told CBS Sports of Reyna: “He’s got to keep proving himself.

“Dortmund is off to a great start and so is he. We want to see how he does, and we’re all excited to have him on the national team.

“I think for Gio, really, the sky’s the limit. He’s got a bright future ahead of him. But like I said, he’s still got a lot to prove to get to that point.

“Obviously, we see the potential right now and a lot of talent. So we’re really excited.

“The first year is very tough, but it’s so important to keep that ultimate goal in mind.

“Just keep going after that. That’s really what I did, even through the tough days. That’ll get you through, setting goals for yourself.”

Baxter had made the bench for the club last month in our Carabao Cup third round match against Barnsley, but was pushed down to fourth-choice with the arrival of Édouard Mendy, and was then forced to make the decision that he needs to move out the club on-loan.

And after Accrington completed the loan deal, he has opened up and announced just how delighted he is to get the deal done, he told the clubs official website after he officially made the transfer move: “It’s taken a while to do because of the circumstances at Chelsea but I’ve got to thank the manager for holding on for me and waiting, it’s a club that ticks all the boxes for me and I’m delighted to be here.”

And it sounds like Baxter will be expected to be the starter, and has even copped the No.1 shirt at the club, where he will be coached by former Millwall and Fulham goalkeeper Tony Warner, manager John Coleman said: “It’s been going all summer and we’ve resisted the temptation to take others because we thought that this one could drop and it has, so we’re delighted to get him.

“It’s now a big test for him, he’s had a couple of loan spells in the past but this is probably going to be the highest level he’s played at in England.

The lad is very talented and needs game time, so this is a very good move for the man to make and one that needed to happen.