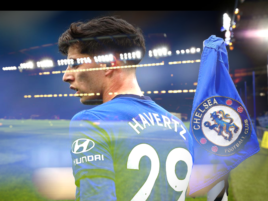 German International Kai Havertz will snub a move to Real Madrid and stay with Chelsea – Reporter Iomie Stanley has claimed.

Havertz had an iffy start to life at Stamford Bridge – but has become the clubs main man up top as his ability to find the back of the net is much better than what Graham Potter has in his squad right now.

But According to Calciomercato, Chelsea could be at risk of losing their star forward Kai Havertz to Real Madrid. Although the German’s contract at Stamford Bridge expires in 2025, Los Blancos are looking to hunt another striker after the World Cup in Qatar.

With Karim Benzema’s contract expiring in 2024 and Christopher Nkunku being heavily linked to England, Carlo Ancelotti wants to strengthen his forward battery by bringing Kai Havertz to Spain.

However – if you believe the words of Stanley – Havertz will be going nowhere unless he is told that he is no longer needed.

He told IcFootballnews: ‘All these rumours about players wanting to leave Chelsea are to be expected – they are in transition right now.

‘However – he is happy at the club – has shown no desire to want to leave and is enjoying playing as a number nine – being the main man – he will not get that at Madrid.

‘He would have seen the likes of Thibaut Courtois and Eden Hazard make a move to the Bernabeu and flop – so it would be a massive shock to see him leave.

‘It is much more likely that Ted Boehly sits him down – and gives him a nice big contract to sign because he is one of the clubs best performers – he is a man that does exactly what he is asked and is a man that fans have grown to love.

‘So unless he is told to leave – unless Madrid offer something crazy – he will decide to stay at Chelsea.”

Atletico Madrid Star Joao Felix has a desire to leave the Spanish giants in the January window – alerting the likes of Chelsea.

But although he has not produced those kind of numbers at Atletico – he has become a big part of the Spanish side and Felix’s talents have also seen him break into the Portugal team, where he has scored three times in 22 appearances.

Now – AS reports that the gifted young player has a desire to leave the club when the January window opens up.

But report also claims that a loan move appears to be the most likely option as there are no willing takers for his £125 million asking price.

We can see him making a loan move to London – that is something the club have done in the past with Saul Niguez – and may be willing to do again with Felix.

The France international could have moved to Real Madrid as a free agent, but decided to stay in Paris after the French President Emmanuel Macron called him and convinced him to stay.

Now – According to Sport, the striker is urging the club to sell him if a reasonable offer comes in, with many top teams eager to snap him up.

The Spanish outlet states that we are the team most capable of matching the financial requirements to sign him, but Man United, Liverpool and Real Madrid also interested in a potential deal.

And if you believe the words of Stanley – the club have the money to complete a deal for the Frenchman – he told icfootballnews: ‘If Mbappe does come onto the market in the January window – Chelsea will be one of the clubs that make an offer.

‘Ted Boehly is a man that is keen to make a statement signing – that marquee arrival that will get tongues wagging – and Mbappe is one of those players.

‘He is already a superstar of the game – is already a player that scored 20-30 goals a season and is a man that is tipped to replace Lionel Messi and Cristiano Ronaldo as the best player in the game.

‘Chelsea will have to pay some serious money – close to £200 million to get PSG into selling and then would need to offer Mbappe around £600k-a-week in wages – but they are one of the clubs that are able to do that.

‘Madrid are in financial difficulty – Liverpool could be sold – Man United are not what they used to be and Man City are not really interested – right now.’

Read More: Attacker will be huge signing for Chelsea Boehly and Potter told