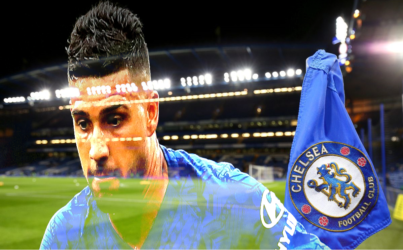 Chelsea full-back Emerson has opened up and admitted that he is very happy at Stamford Bridge.

We signed the former Santos star for £17.6million in January 2018, as he was signed as a back-up option for Marcos Alonso, who proved many people wrong by becoming one of the best left-backs in the country.

However, there has been alot of speculation in the media over the past few weeks which have suggested that he could be one of the players that Frank Lampard will seek to offload in the summer in order to raise funds to acquire his personal signings.

The defender returned to training alongside the rest of teammates last week, but just like the league’s future is still shrouded in mystery, Emerson’s own future is said to be far from settled.

But despite all the transfer rumours, it seems that he has no desire to leave the club just yet, he told the official website: “I have a strong connection with Italy and I put in great work at Roma. So when the transfer window opens, there are always these kind of rumours.

“[However] it’s difficult to see anything happening now since I’m quite happy here. It’s not the right time [to leave the club].”

Lampard himself has recently talked about how important he felt to try to do not only physical but mental health checks on his players, and it’s something that Emerson has certainly appreciated.

“In these times where we weren’t training, Lampard was the man who cared a lot about us. Every week he made a meeting with the entire team on the Internet.

“He’s an open man, he always asks what we want, how we’re feeling, and he’s always been on our side. This makes all the difference in team unity.

“Since he’s young and a former athlete, and he knows how it is to be on our side [as a player], he’s always put us at ease to let us speak our minds. And that helps a lot! There’s no distance between coach and player, we’re all working together in the same team, and we want to be on the same wavelength.”

MOST READ: Chelsea have expressed an interest in signing world class defender in summer

YOU MAY HAVE MISSED: German star kai Havertz speaks out amid summer Chelsea transfer rumours