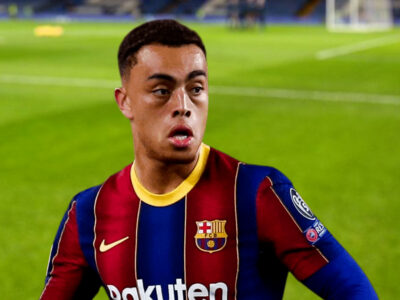 Chelsea target Sergio Dest will not be leaving Barcelona during the January transfer window, according to the right-back’s representative.

Thomas Tuchel said himself at the start of December that he was not planning a busy transfer window, but confirmation that Ben Chilwell needs surgery, and will be out until the new year means that he needs to add to that back-line.

There has been a number of players linked with a transfer move to the Bridge, and the latest name to to linked is that of Dest.

The right-sided defender, that can operate on the left, has become a reported target of the Blues as the board know Barcelona need funds in order to buy the quality of player Xavi needs to get the club back to the top of the game

It had been claimed that Tuchel had told the board that he would like to the club to sign Dest this transfer window, either on loan until the end of the season or on a more permanent basis.

However, despite all the speculation that we are preparing to put an offer on the table, His agent has opened up and announced that Dest is not looking to leave Barcelona this transfer window.

“It’s a great club. That’s why it’s actually rather unlikely at the moment.”

Dest is a quality player that would have been a decent replacement for Chilwell, so the fact that he is staying put will be a massive blow to the club. But they will need to act quickly if they are looking to sign some cover, as their January targets are either staying or closing in on other teams

YOU MAY HAVE MISSED: Chelsea ready to offer £400,000-a-week to bring Premier League star to the Bridge

Get the Chelsea word out there!
Tags: Chelsea Sergio Dest